There's one unwritten rule of blogging that I've tried to follow since I started this blog last summer. Put simply . . don't write about stuff that will get you ridiculed. I think I've done well with that until now, but the streak will no doubt end today. Why, you ask? Two words: Vanderbilt football.

That's right my friends, The Vanderbilt Commodores football team is 4-0, 2-0 in SEC play and ranked #19 in the country. Let's forget, just for a moment, that their 2 SEC wins are against South Carolina, whose collection of quarterbacks couldn't start for at least 10 Charlotte-area high school teams, and lowly Ole Miss, although to Ole Miss's credit, they did beat Florida in Gainesville AND they hosted the first Presidential debate this year. Pithy put-downs aside, wins are wins, and the Commodores should make no apologies for their current record. Florida doesn't get to say "Well, one of our losses was to Ole Miss, and they suck", so Vandy can flaunt the win without an asterisk.

Today the Commodores take on the #13 Auburn Tigers, a one-loss team that's a perennial power in the SEC's Western division. Their one loss this season came at the hands of LSU, a top-five program by all accounts. The Tigers get their star running back back from injuries today, and they come to Nashville today as the favorite to win the 6:00 EST matchup.

Noteworthy about the game today is, among other things, the fact that ESPN's College Gameday is being broadcast from the Commodores' home in Nashville, TN for the first time in its history. The #19 ranking in the national poll is Vanderbilt's highest such ranking in nearly 50 years, and I'd venture to guess there aren't a whole lot of folks out there that expect it to continue after tonight's game. Those skeptics have a lot to base their predictions on, namely Vandy's paltry offensive and devensive production numbers for the season. The Commodores aren't ranked in the top 70 in the country in either offense or defense. But, as you'd expect from an academically-focused school like Vanderbilt, their team is extremely well disciplined, so much so that they're the least penalized team in the SEC. When you're trying to take down the big boys, you can't afford the little mistakes that can cost you yards, drives, and points. Also noteworthy is the Commodores' #1 ranking in all of college football in terms of turnover margin. Vandy's offense takes care of the football, and the defensive playmakers and schemes create turnovers by their opponents.

Now listen, people. I'm asking for a little bit of help today. It just so happens that on the hour of this highly-publicized, important matchup for my alma mater's team I will be attending, of all things, a wedding. For a couple that, quite frankly, I'm not overly fond of. But, we've already bought the gifts, so we'll be going to the wedding and hoping for both an open bar and a TV tuned to ESPN at the reception. If I don't find a TV, I expect all of you to flip on the tube around 6:00 Eastern and root for the Commodores to upset Auburn tonight. If you don't, just at least tell me you did, so that I can feel better. If anyone wants to take on the role of "scoring update text-messager", feel free. And now, we will return to our regularly scheduled birds-and-kids themed programming here at The Guide.
Posted by Corey at 9:07:00 AM 2 comments:

This morning I planned to bird on the McEachern Greenway near Downtown Concord. When I got to the parking lot, I decided to change plans and explore the area on the other side of the park, near where construction is beginning on the Downtown Connector Greenway. The vegetation has been cleared out for the connector, but no work has been done yet on the actual improvements. I saw this as an opportunity to explore the area before it becomes heavily trafficked.

The weather this morning was perfect, low 60's, no humidity, clear sunny sky. The birds obviously thought it was pretty great as well, because they were active, vocal, and surprisingly congenial. I was getting great looks at numerous species, including Downy and Hairy Woodpeckers, American Redstarts, and throngs of Carolina Wrens. In one of the deepest parts of the woods I saw a raptor fly out and across the clearing above the path. I looked up and got a great view of my third owl of the year, a Barred Owl. He was gone within a matter of seconds, but his markings and shape were unmistakeable, so I feel confident in the ID. It took me long enough, but I finally added all three of the area's common owls to my Big Year list.

There is no really exciting conclusion to this story . . the owl's pretty much it. I did, however, get a couple of good photos, so I figure why not share them. Ok, so the one of the Black and White Warbler isn't exactly a "good" photo, but photos of warblers are so danged difficult to get that I feel obligated to share them. As always, click the photos to enlarge. In order, they're Downy Woodpecker (male), Black-and-White Warbler, Brown Thrasher, Common Yellowthroat (female), and Northern Cardinal (duh, male). 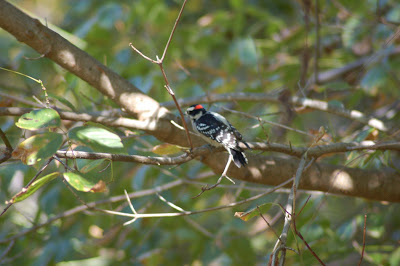 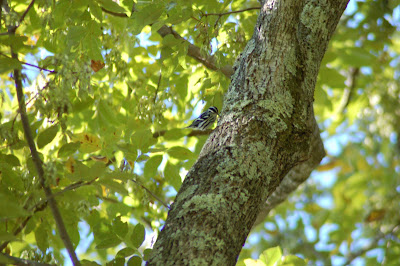 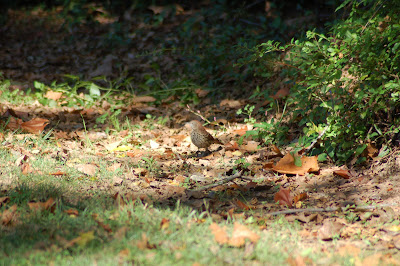 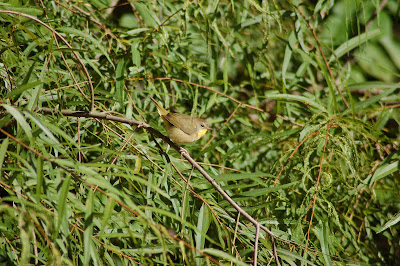 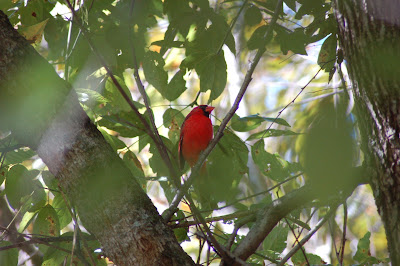 The girls and I had already taken one long walk around the neighborhood this afternoon, but the cabin fever was still lingering. Granted, it was Mandi that was suffering from it, but as she's far less mobile than the rest of us these days, it's up to me to get the kids out of the house when their rambunctiousness threatens to drive her over the edge. So, after dinner, we put on our coats and headed out for another walk around the block.

Our first walk took us toward the main roads and the playground, so this time we decided to go the other direction and head down toward the nature trail. It quickly became obvious, as it often does, that Lily would need to be coaxed into keeping up with Avery and I, so I enticed her to pick up the pace by promising to walk by her friend Matt's house. The tactic seemed to work well, as she immediately picked up the pace and said, "Ooh, yeah, I wanna go play with him!"

As we made our way down the street the end-game began to evolve. The prospect of simply playing with Matt seemed to be losing its luster, so eventually her plan morphed into a much more endearing one. Now she did not want to play, but rather she wanted to go give Matt a hug. I began to formulate my rationale for not actually stopping at Matt's house, which frankly was not that difficult because it was getting both chilly and dark outside. Surely she'd go for that line of reasoning.


Then, as we rounded the corner and passed by Matt's neighbor's house, Lily changed things up again. But this time, I was ill-prepared.

As she asked to go ring the doorbell, I started in with the "It's too cold and it's getting dark" spiel. Undaunted, she replied with something I never saw coming, and the only response I could muster was one of unbridled laughter.

"But Dadddddddyyyy, I really want to give Matt a kiss!"

I literally laughed out loud . . so loud that I'm quite sure a few neighbors came to their front doors to see what the heck was going on. I hurried the girls along and assured Lily that not only would we not be going to Matt's house, but that the next time he came over to play they would NOT be allowed out of my sight!