Lily: Daddy, I was right and you was wrong.

Lily: Yeah. Girls are right, and boys are wrong.

Which graduate program wants to step up and just give the girl her Ph.D? I mean really, will she ever be able to more accurately boil life down than she did just five short minutes ago? I think not. Case closed.
Posted by Corey at 8:47:00 PM 4 comments:

Most of the time when you think of appointment TV images of once-weekly or once-only shows come to mind. For me, 24 is the ultimate in appointment TV. They missed an entire season this year due to the writers' strike (poor TV writers and their piddly $225k/year salaries), and it was agony. When they aired the 2-hour season preview last week I could barely remember where the last season left off. I'm certain it will all come rushing back when Jack Bauer saves the new season's first innocent civilian from certain doom in the premier.

Lately we've (not the proverbial "we", we as in me and the kids) discovered a "new" show that we set aside time to watch. Every weeknight at 7:30 we meet on the couch for the newest installment of Wheel of Fortune.

Today I must have lost track of time, because at precisely 7:29 Avery came scampering into the living room and plopped herself down on the couch. Lily ran in behind her and said "I call the middle!" I was in the middle of feeding Mason and had to be gently reminded that it was "time to watch that one show we always watch at 7:30!" Apparently Avery briefly forgot the name of her favorite program.

So why, you ask, did we choose Wheel? Honestly . . because it's not Jeopardy. I prefer to be left in peace to watch Alex Trebek. But, when the wagers have been revealed for Final Jeopardy and a victor has been determined, I'm happy to have the girls' company for Pat and Vanna.

Avery's really starting to catch on to how the game is played. She's hip to some of the strategies . . solve early vs. spin to accumulate cash. She understands the different types of puzzles. Every time a "Before & After" puzzle comes up she says, "Oh, like Fruit Cocktail Dress right?" You got it. She hasn't solved her first puzzle yet, but I can't wait until she does.

When Mason was done eating, which he does facing the TV, I turned him around to burp him. Apparently he wishes to participate fully in the family's activities, as he literally craned his little neck around while I was whacking him on the back in an attempt to see the TV. Once he burped, I laid him down on the couch so he could catch the final puzzle. He was completely content to just hang out ad watch until the show was over, at which time he insisted on 2 more ounces of formula. Kinda like his version of dessert I suppose . . after all, he didn't get Advent Tree candy like the girls did. 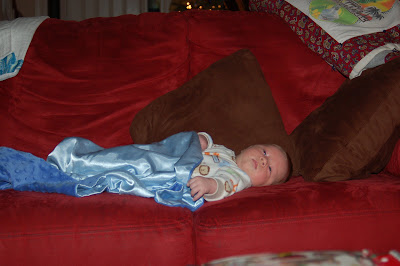 So we've been thoroughly indulging in our appointment TV time the last few days. Sometimes the most lasting memories are created from silly little moments like these. Perhaps the girls will look back as fondly upon our Wheel of Fortune time as I do little moments from my childhood. Or, maybe they won't. Either way, it's good times.
Posted by Corey at 8:52:00 PM 3 comments: 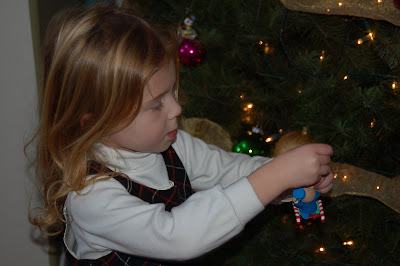 I can't believe this took us until December 1st to accomplish. Most years we've got the tree up by the day after Thanksgiving, and I'll be honest with you, I'm never exactly an enthusiastic participant in the exercise.

I really dislike the way Christmas and its corresponding "season" has turned into an endless sales blitz that lasts nearly 2 months. I swear, I saw Christmas decorations before October was over this year. I can see it for what it is, an attempt by retailers to push people into that "spend with reckless abandon" mode as early as possible in hopes that this year's sales figures will exceed last years.

I feel I'm often misunderstood in my disdain for the pre-Thanksgiving onslaught of Christmas music, etc. I guess it's possible, considering my typical method of expressing said disdain is an out-an-out grumpy disposition and snappy tone. It aggravates me to no end, and those who actually enjoy it can't be bothered to ask my point of view . . they'd rather just turn up their noses and label me "The Grinch". So be it, I have my reasons.

Don't get me wrong, I don't dislike Christmas. Not by a long shot. It's probably my second favorite holiday behind only Thanksgiving. But the reasons why I like it do not coincide with the reasons why it's jammed down our throats for 1/6 of the year.

Anyway, now that I got that little explanation out of the way, we can get back to the point of the post. We spent yesterday afternoon putting all of the ornaments on the tree. Mandi put the lights on in the morning before I left for work, and then when Lily got up from her nap we broke (literally and figuratively) out the ornaments and got to decorating.

To put it mildly, this was an exercise in patience. Lily LOVES fancy, shiny things, and her reaction to the sight of every individual ornament was priceless.

"Oooooh, Daddy, look! This one matches the other one!" 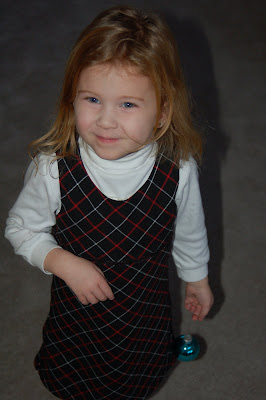 Avery, on the other hand, is primarily interested in being in charge. It doesn't matter how inconsequential the activity, if she's not exercising some semblance of power over the process she is just not into it.

Avery: "No, that one that says Lily and has your birth date on it is actually mine!"

Avery: "No, Lily, it's not. Now go stand over there while I put this ornament right where you were trying to put yours." 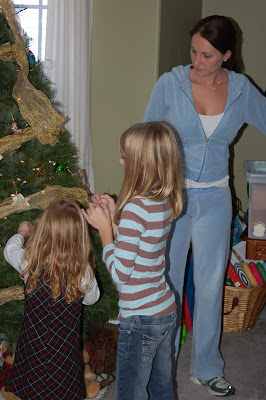 Mason had an entirely different set of emotions regarding the exercise. These two photos pretty much give you an idea of the two ends of his spectrum. 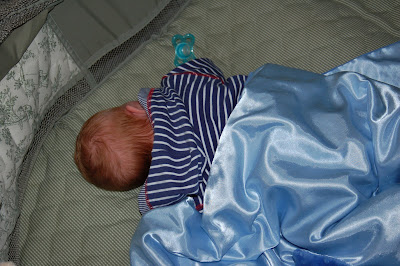 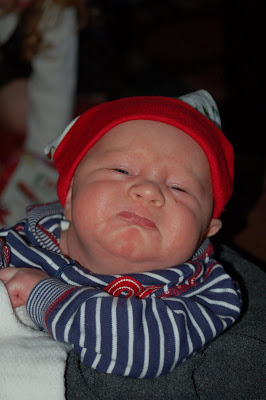 Maybe it was just the silly hat he didn't like. Hard to say.

The festivities continued for a scant half hour until the entirety of our 6-foot Douglas Fir was adorned with Christmas cheer. And you know what? I actually enjoyed it. I enjoyed the time spent with my family, thinking about celebrating with them later this month, and I enjoyed the sights, sounds, and smells (it smells like a candle factory threw up in our house) of Christmas. I shall leave you with a tidbit from our favorite Christmastime background entertainment, Christmas Vacation.