I am, I know. I feel bad for the 6 or 8 people who include this blog on their blogroll, I've disappointed you for more than two weeks. For some reason I hear Randy Travis singing in my head right now . . .

You've been too gone for too long,
now it's too late to come back home.
It's been so long since you walked out my door,
now you're just an old song nobody sings anymore.

I've got a new love and she's a true love,
but darlin' how could you have known.
You've been too gone for too long,
now it's too late to come back home.

I don't have a new love, per se, unless you want to count Facebook. Or my Crackberry. I have enjoyed sharing my life through this page in more ways than I ever would have imagined. There are far too many reasons (real reasons, not Facebook) that it's just become a low priority for me lately. Reasons I don't have the energy or, frankly, the inclination to go into right here right now.

Suffice it to say, I have over-extended myself in a number of ways, and the blog is suffering for it. I go birding MAYBE once a month now, and when I do there just doesn't seem to be "extra" time to sit and blog about them. Plus, I'm not doing the Big Year list this year, so there's no real drive to get out and "acquire" new birds, and as such no great stories of accomplishment. This is about what I've been getting in the way of bird photos left. A mockingbird eating my compost pile . . how picturesque. 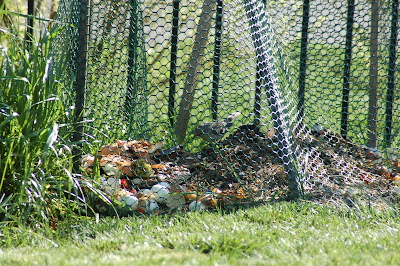 Then there's the whole "3 kids is really no harder than 2" fallacy. Whomever spun that bullshit yarn should get a swift kick in the nertz. Toting 3 kids to the park in my compact grocery-getter with sub-par air conditioning ain't what I'd call easy. We still do it, but by the time I get them all home I'm ready for a beer and a nap . . the computer just doesn't crawl high enough up on the list. I do take pictures at the park, I haven't completely slacked off, I am just not as good at sharing them. Here's one from about a week ago. 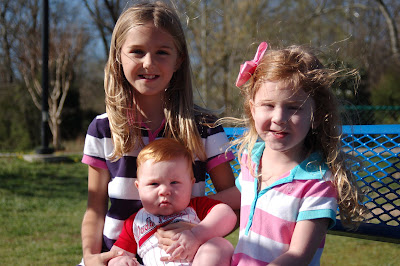 I will not make the "nothing worth writing about" excuse. These kids are a laugh an hour, and sometimes a lot more. If only I still had that video camera I lost in the Kansas City airport when Lily was a baby . . if you all could watch her play Disney "Sing It" on the Wii, or listen to the crazy songs she makes up when she's driving around the block on her tricycle, you'd double over laughing. But really, with Mason in the stroller, Avery piloting her scooter into the middle of traffic, and making sure Lily's "Look ma no hands" routine doesn't result in 2 skinned knees, who the hell has time to try to remember the funny stories? I don't.

You've missed out on visits from Meema. 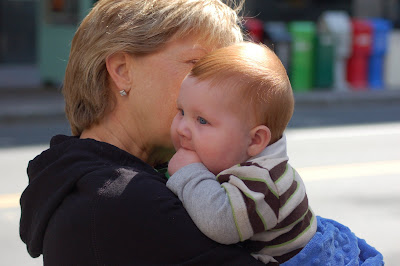 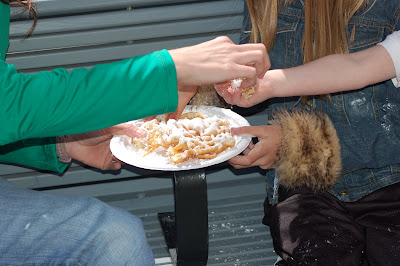 Lily's first soccer practice (of what I'm convinced will be a long and storied career). 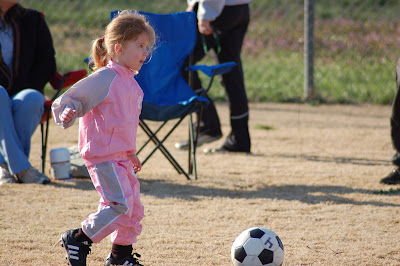 And other milestones. Mason's eating some solids now (yippee, I know, how exciting). It is for him though, kid can eat like a champ. 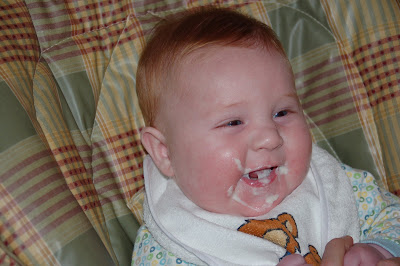 He can also put his feet in his mouth and roll himself over from back to tummy (difficult to capture, so here's the foot thing). 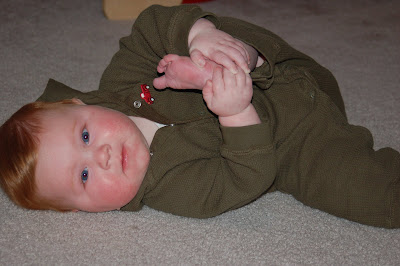 I've given all of my excuses, and I don't know if I actually like any of them enough to give them "primary reason" status. But, as is the popular thing to say nowadays, it is what it is. While I have no intention of removing this blog from its rightful place here on Blogger, I also do not forsee much of a future for it. I'm not guaranteeing that this will be my last post, but the frequency is something you might consider getting used to. I'm just over-extended right now, and something's gotta give (this paragraph counts major points toward the "How many cliches can you use in one paragraph" contest I entered). If you read occasionally and enjoy the photos, I encourage you to seek me out on Facebook. It's not quite as personal, but its what's been getting the attention lately. I suppose this is my way of always striving to under-promise and over-deliver. I always hated "promises a filet mignon and serves you a hotdog" guy, and I refuse to be that guy.

So for now, I bid you all a fond farewell, and I look forward to reconnecting elsewhere.

Life gets in the way doesn't it? You'll stay on my RSS feed so if you pop back here I'll know it!
Have fun with those gorgeous kids.

Awe, this post makes me sad. Aunt C doesn't ahve Facebook, so I guess I will have to call and bother you more often for stories and pictures.

I hope your spirits lift Cor, I love you more than life and you're all in my daily prayers.

This post makes me very sad too! I get complete joy out of reading your blog and seeing pictures of the kids.
This is the frist time that I've commented but don't think that I don't read.
I've been missing your posts!
No facebook here.
I hope that things get better for you

I will miss reading your stories Cor, you really have a way with words! Love all the pics. If you can, send some by email every now and again, the kids are growing so fast.
Love you!